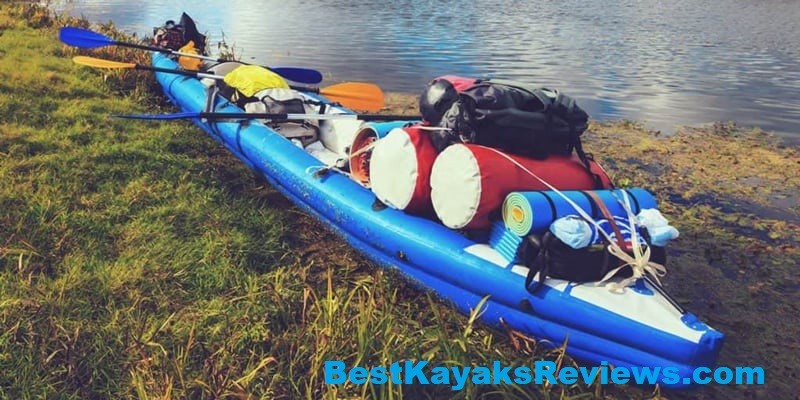 We all know kayaks are pretty small-looking, lightweight boats. Could they be more robust than they appear? You may be considering going on a kayak trip with someone in your circle, but you’re wondering how much weight can a kayak hold?

What Is a Kayak’s Weight Limit?

The maximum weight limit, load limit, maximum capacity, or weight rating – it goes by many names – is the rating a kayak manufacturer can assign to indicate how much weight a kayak can hold and remain afloat.

That’s the easiest way to put it.

In addition, it’s supposed to facilitate the selection of a kayak that’s suitable for you. In fact, maximum capacity ratings ended up causing a lot of confusion among paddlers – and beginners in particular – for two reasons:

There are no industry standards regarding how a kayak’s maximum weight capacity is determined. Every manufacturer has its own rules.

In addition, this weight rating is not based on the paddler’s body weight. For example, if a kayak has a 250-pound weight limit, it doesn’t necessarily mean it’s suitable for someone who weighs 250 pounds. It will still float with a total weight of 250 pounds, but it won’t be usable.

Even though there’s no industry standard for determining weight capacity, the consensus is that the following three factors affect it:

What Happens if You Exceed the Kayak’s Weight Limit?

Several adverse effects can occur when a kayak is overloaded.

The boat will sit lower in the water if you get too close or go over the weight limit, and you’ll probably get wet on the trip.

As a result, you’ll have trouble paddling the boat, both because you’re sitting so low in the water and because the boat will be more sluggish.

In addition, the boat will move much slower than it should and will be more prone to tipping over.

In addition, exceeding the weight capacity puts you at risk of sinking below the waterline. As a result, you should never exceed the manufacturer’s weight limit.

You should also try to stay at least 25-30% below the given weight limit for best results. When the kayak is well within its abilities and not pushed beyond that, it will perform best.

The Right Weight Limit For a Kayak

For example, if you weigh 295 pounds and want to bring your dog a more flexible fishing rod, you should buy a boat with a weight limit higher than 350 pounds. As a general rule, you should keep your kayak (including your gear and accessories) under 70 per cent of the rated weight, as overloading a boat will result in poor performance. Likewise, weight distribution is just as important as the weight limit because if the kayak is unbalanced, it will be harder to control.

Kayaking is suitable for people of all sizes. Smaller people may not take more gear with them in most kayaks, but they can still take enough to go on multi-day trips.

When you are more significant than average, you should consider several things when buying a kayak.

For more significant than average kayakers, finding kayaks that are safe is one of the most important criteria. Knowing how much weight your kayak can support is the most critical factor.

A solid weight buffer gives you more stability and, with that, more confidence when you’re new to the sport. The kayak you choose must have a weight capacity that allows you to add your gear and yourself.

A new kayak should have a load capacity of around 70% of the higher weight capacity of your current kayak.

For instance, if you’re 200 pounds and have 100 pounds of gear and are hoping to hook around 50 lbs. of fish during the day, You will need a kayak that can carry more than 350 pounds.

Using the seventy percent calculation, you’ll need a maximum capacity of around 500 pounds as 350 pounds is 70% of 500 pounds. If you follow this formula, you won’t exceed the maximum weight limit of your kayak.

How do I choose the best kayak for an overweight person?

All of this comes back to determining the ideal capacity and the maximum capacity of a particular kayak.

In addition, the weight of the person using the kayak will play a role.

In general, fishing kayaks, tandem kayaks, and inflatable kayaks are the best kayaks for overweight people. As mentioned earlier, fishing kayaks can carry a lot of weight due to their design for hauling fishing equipment.

However, tandem kayaks can be used by just one person, and they often have a maximum capacity of 600 or 700 pounds.

An excellent inflatable kayak generally has a higher weight capacity than a comparable rigid kayak. Most of them can hold 500 pounds or more.

Before buying or using a kayak, make sure to check the weight limit.

Final Thoughts on How Much Weight Can A Kayak Hold

And, now you’re more than capable of answering your own question; how much weight can a kayak hold?

And to be honest, there’s no such thing as too much weight capacity – at least not from the performance standpoint.

That way, you can be confident that your ‘yak will be able to handle your weight and the weight of your equipment and other stuff you might bring on board.

FAQs Related To How Much Weight Can A Kayak Hold